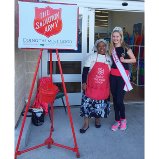 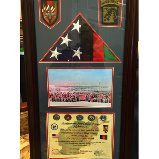 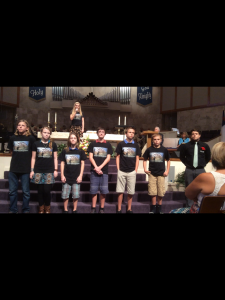 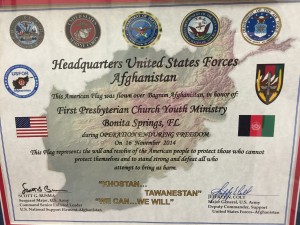 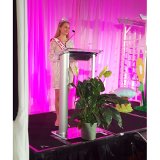 Julia Rowland, 2014 Florida Jr. Teen Queen has had a busy year representing National American Miss. She had a blast during the holiday season volunteering with the Salvation Army spreading holiday cheer and giving back to her community. Julia also initiated Harvest for Heroes Outreach Project for her service project at nationals. The purpose of Harvest for Heroes Outreach Project is to lift the spirits and meet the evolving needs of our Active Duty communities and provide volunteer opportunities for the residents of South Florida to express their appreciation to members of their Military. As a daughter of a retired Navy Captain and cousin of an Active Duty Army Soldier currently serving in Afghanistan, she understands what conditions the Military personnel are under and wanted to contribute by boosting our troops’ morale. With the wonderful support of her church’s congregation, Julia was able to produce over 500 care packages. She was shocked and overwhelmed to have received a beautiful plaque along with a letter thanking her for her care packages from the United States Army troops serving in Afghanistan. They even flew a flag over Bagram, Afghanistan in honor of Julia’s church. Julia also had an exciting weekend in Boca Raton representing NAM as the emcee at the American Girl Doll fashion show in support of the Palm Beach County Literacy Coalition. 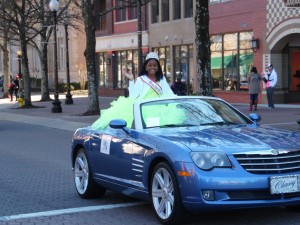 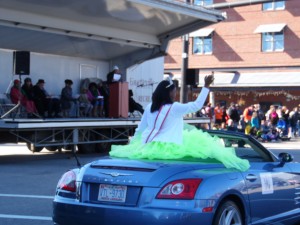 Nikya Hightower, 2014 Miss North Carolina Pre-Teen has been busy around town! Nikya was very excited to participate in the Martin Luther King Jr. parade and she really enjoyed her ride! She also enjoyed cheering on everyone as they crossed the finish line while volunteering for the ALS walk at Methodist University in her hometown of Fayetteville, NC. She was joined by her sister queen 2014 North Carolina Jr. Pre-Teen Queen Amaris Shipman. 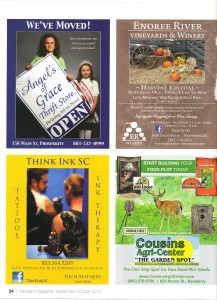 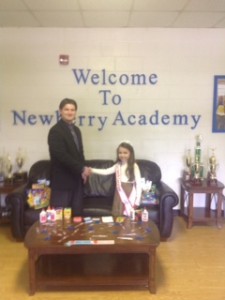 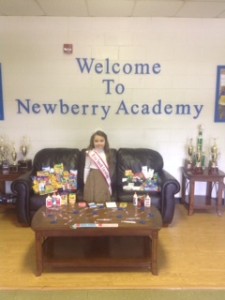 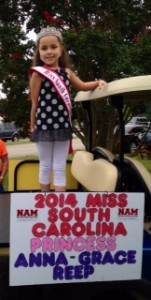 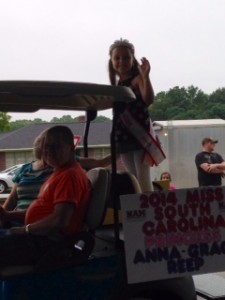 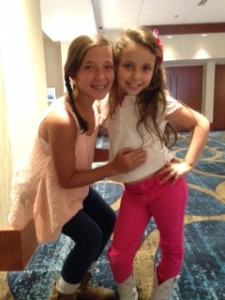 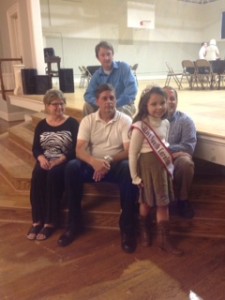 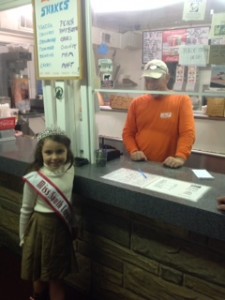 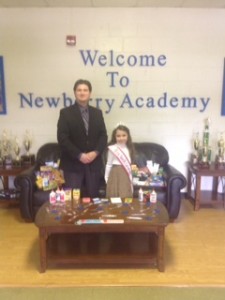 Anna Grace Reep, Miss South Carolina Princess, has been busy volunteering around town.  Anna-Grace was in the Little Mountain Reunion parade in August representing NAM as Miss South Carolina Princess. It is South Carolina’s Oldest Folk Festival and part of her hometown of Newberry County. Even in a light rain, Anna-Grace rode in the parade & afterwards visited with some of the crowd talking about NAM and how it promotes confidence in their girls.
She then met with the Head of School at her school to donate school supplies that were collected at her South Carolina state pageant. Brian Fitzgerald, Head of Newberry Academy thanked her for such a generous donation to go toward the student body. He is so proud of his second grader who is South Carolina Princess for National American Miss. Anna Grace participates in Eaglette Cheerleading and is on the High Honor Roll for the school.

Anna-Grace also met with the Mayors of the towns in Newberry County South Carolina last night.  She met with the Mayor Lisha Senn of Silverstreet, SC; Mayor Darryl Hentz of Pomaria, SC; Mayor Derek Underwood of Prosperity, SC ; and Mayor Foster Senn of Newberry. They all wanted to meet with her and wish her luck as she will represent our community & state at Nationals.

Also she met with Mayor Derek Underwood privately as he welcomed her nonprofit thrift store Angels of Grace to the town of Prosperity. She had appeared in an advertisement with her sister in the Newberry Magazine where the Thrift Store had moved to Prosperity. It was featured on page 24 in the September/October edition. Anna-Grace is the ambassador and a volunteer in the non-profit store. She helped it moved and works in the store setting up displays, sorting clothes, and also helping children shop in the store.

After a busy  day with school, cheerleading practice & appearances, she stopped by one of her proud sponsors Zesto’s of Newberry to get supper. Mr. Jack the owner knows that their Fried Chicken is her favorite food. They always have their NAM Queen a chicken leg & a milkshake ready.