Charisma Tran, Miss South Florida Princess, was featured on her local news showing the work she has done with Children’s Miracle Network. 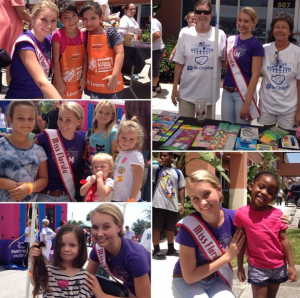 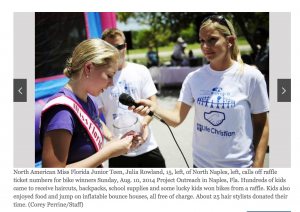 Julia Rowland,  2014 Miss Florida Junior Teen Queen, started her reign representing  South Florida by donating  school supplies and books to Project Outreach and she attended their Back to School Bash. Julia was also featured in her local news, check out the link below to read the story.

Jada Newkirk equates her pageantry experience with summer camp: A long weekend filled with lots of organized activities and time to socialize with fellow participants.

“It’s really fun because when you’re done with the competition, you hang out with your friends,” Jada said.

But this year the San Mateo resident took home a little more than the glimmering happy memories from camp-like camaraderie. She brought back a crown.

Instead of outward beauty, Jada explained, the judges look for qualities like confidence and good stage presence. In fact, makeup isn’t even allowed on any contestant under the age of 12, Jada noted.

The pageant is split into smaller competitions with a formal dress component, a personal introduction and a one-on-one interview, all meant to gauge poise, personality and public speaking skills.

Ten percent of the score is determined by the contestant’s community involvement. Jada spends time volunteering at her local community center and reads to seniors at Sunrise Senior Living in San Mateo. She’ll also walk in the Susan G. Komen Breast Cancer walk this month.

When she turns 13, the animal lover said, she’d like to volunteer at the Peninsula Humane Society.

In July, she attended the Junior Olympics in Wichita, Kan. She competed in the pentathlon, scored two personal records and was in second place in the 800-meter run before the sweltering heat got to her, and she nearly passed out.

If it weren’t for the above-100 degree temperatures, Jada feels confident she could have won.

“I could have gotten first place,” she said matter-of-factly.

Jada’s demeanor shows she is secure and upbeat, traits she and her mother say the pageants have helped her develop.

“It’s been really good (for her) to come out of her shyness,” said Jada’s mom, Teleza, who is a fan of the pageant’s focus on academics and community service. “It’s really building their confidence. Every girl is different, and that’s fine. (They) celebrate each girl’s individuality.”

During her personal introduction, Jada said she talked about running track and what she wants to do when she grows up.

The latter is a lengthy list that includes being an Olympic track gold medalist as her No. 1 goal “because I love to run!”

She’d also like to act in commercials or maybe try out modeling. In addition to winning the crown in her age group, Jada also won the Actress, Casual Modeling and Most Promising Model competitions in July’s pageant.

If she acting and modeling don’t work out, she’d like to be a sports broadcaster for track or football, or maybe work as a veterinarian.

In the nearer future, Jada has the national pageant in Anaheim to look forward to during Thanksgiving week, complete with a trip to Disneyland and a Hollywood tour.

And in December, she’ll spend a day in San Francisco with the other pageant winners, including a cable car ride to Ghirardelli Square.