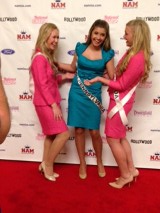 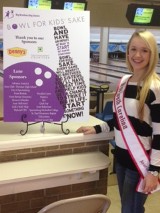 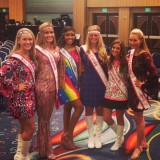 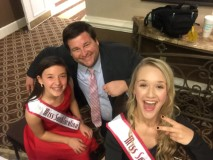 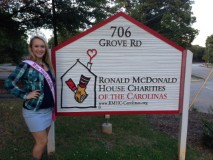 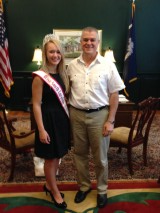 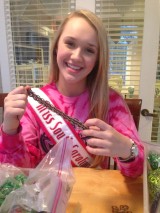 Congratulations, and welcome to the Miss South Carolina Pageant! I am truly looking forward to meeting each and every one of you. This weekend is going to be very exciting and an adventure you will always remember!

Being Miss SC Jr. Teen has been such a blessing to me. It allowed me the opportunity to volunteer at the Ronald McDonald House Charities, making pop tab bracelets, which helped to raise money for the organization. I also volunteered for Big Brothers Big Sisters at their Bowl for Kid’s Sake and helped at the spring 2015 Special Olympics. All the while, meeting some amazing people along the way!

Going to Nationals in California is an experience I will never forget! From competing with the best of the best to touring the streets of Hollywood, my time at Nationals is something I will treasure forever! I can honestly say I have made friendships that will last a lifetime.

Remember to always smile, have fun, and make as many new friends as you can. Above all else, believe in yourself. You are already a winner!

As my journey comes to an end and a new one begins for one of you special girls, I wish you all the best life can bring!

Wishing you the Best Always,

Wow. What a crazy but fun year I had as the 2012 National American Miss Tennessee Jr. Teen. I am so excited to share with you all some of my favorite memories throughout this year. When my name was called I was in shock. I remained completely composed however until I saw Anna and remembered what a great group of sister’s I’d have to reign with. It was that moment when I started to cry and couldn’t compose myself for pictures after. There truly are no words to describe my national’s experience. I made some amazing friends and caught up with old ones. From crazy rehearsals, our day in Disney, and competitions we always had a great time. I even met my personal favorite Disney character Winnie the Pooh! I was able to help at Anna Grace’s queens for a cure charity pageant in October. She did a fantastic job and it was awesome to see and catch up with the other queens she had present, including Miss Tennessee Teen USA Emily Suttle. I participated in the Jingle Bell Run walk for arthritis by passing out water cups to the runners and met the governor with my fellow sister queens! However, the greatest blessing throughout this year has been furthering my platform, the American Heart Association. I spoke at various elementary schools throughout my area on the importance of keeping active and healthy through the Jump Rope for Heart program. I spoke at the state capitol and met with my local representative and senators as a high level advocate. My favorite event however was the Red Out in my high school. This was something new this year and as a school we raised 3750 for the AHA! It was so cool to see my classmate working for a cause so near to my heart. As mentioned earlier, I was truly blessed with a great group of sister queens. Ava, Taylor, Anna Grace, and Sarah what a privilege it was to reign with each of you. You all brought smiles to my face and I am so thankful for each of you. I know you will all go far wherever life takes you. I’d like to say thank you to my family; Mom, Richard, Taylor, Granny and Tate for always being my biggest support system. You all mean the world to me and I love you all. Most importantly I’d like to thank God for this amazing opportunity. This year would not have been possible without his many blessings. To the girls competing be yourself and have the time of your life! You are all beautiful and winners and I can’t wait to meet all of you. Best of luck!!

It takes the entire Flippo family to box up more than 9,000 books. The books will travel more than 8,000 miles in the coming days.

It all started after 12-year-old Jordan won a national beauty pageant.

It takes the entire Flippo family to box up more than 9,000 books. The books will travel more than 8,000 miles in the coming days.

It all started after 12-year-old Jordan won a national beauty pageant.

“Our director had really told us, you want to do something beyond the pageant,” Jordan Flippo, a 6th grade Cascia Hall student. “You don’t want this to last only one year.”

So the family pooled its ambitions.

“About the time my brother comes in from a trip from Africa, he’s telling them all about this neat little school,” mom Sandy Flippo said.

Jordan’s uncle Doug Henderson is a photographer, and his job takes him all over the globe.

But it was his time in Africa that gave the Flippo family the idea for the “Reading with Africa Project.”

“The more we’re hearing about it and seeing the pictures, these kids just look like they’re thrilled to be there,” Sandy Flippo said.

He told them about an overcrowded school in Uganda.

“So there are 550 kids now, in a one-room schoolhouse, dirt floor, but no books,” Jordan Flippo said.

Nicole Flippo added, “Some of them haven’t even seen a book, much less read one.”

So the sisters decided to hold a book drive at school.

“If a kid brought two books, then they didn’t have to wear their [school] uniform,” Jordan Flippo said. “They could wear their beloved blue jeans.”

Tulsa Public Schools and the library pitched in.

And now they have more books than they can ship.

“This is the state of Oklahoma giving books to Africa,” Nicole Flippo said.

The family’s dining room table is now the processing center.

“I’ve been in charge of sorting the books,” Nicole Flippo said.

It’s a very important job that will keep the books organized on the journey overseas.

“You have to think about how you’re laying them out there,” Sandy Flippo said. “The Dewey Decimal System isn’t going to work on a dirt floor in Uganda.”

Just one book will open a window to a whole new world.

Sandy Flippo said: “Can you imagine, out of those 550 kids.. is there going to be an Albert Einstein, or a J.K. Rowling?”

A world of possibilities with every turn of the page.

The Flippo family will leave for Uganda on Thursday. They hope to set up a library when they get there and teach the kids a few American sports, like baseball and basketball.By Grant Sloan, News On 6

Check out the news story that aired on Tulsa’s news.

Service-Over-Self is a youth volunteer program that encourages youth to get involved in their community and help others. Brianna chose to participate in their Hugs for Horses program for children and young adults with disabilities

Service-Over-Self is a youth volunteer program that encourages youth to get involved in their community and help others. Brianna chose to participate in their Hugs for Horses program for children and young adults with disabilities. During her service she assisted the participants with horseback riding lessons. Brianna walked along beside the horse with Jenna and Jacob. As she walked with them, she tried to encourage them by singing songs with them, and helping them have fun while they were riding. The really cool thing about her volunteer experience is that she learned that she can be a positive influence on other people. It made her feel good to know that Jenna and Jacob had fun while she was helping them. Brianna enjoyed the hugs, and it was very inspiring to her when Jenna told her Mommy that she wanted to be just like Brianna when she grew up. This experience was very motivational to Brianna to inspire her to be the best that she can be so that she can continue to be a person that Jenna can admire. Brianna had such a good time participating in Hugs for Horses and Service-Over-Self. Two of her friends have decided to become a member as well so that they can participate and join in with all of the fun. This is an experience that Brianna will never forget, and she plans to continue serving others like Jenna through the Hugs for Horses program for a long time.

All the money goes to under privilege children to assist them with school supplies, etc. Last year they had 1500 participants and expect more this year.

National American Miss North Carolina Jr. Pre-Teen Queen Cailee taped a TV spot for the upcoming event Big toys for kids sponsored by Communities in Schools which airs on Channel 63 in Lexington. All the money goes to under privilege children to assist them with school supplies, etc. Last year they had 1500 participants and expect more this year. Cailee will also be volunteering on August 27, 2011 in Lexington for this event. Cailee will be receiving the highest honor of the Presidential award for her volunteer work (Gold level).

For her national pageant community service Alajah went to nursing homes and participated with the residents during their activity time.

Kristen participated in the 9/11 National Day of Service. She baked and delivered homemade chocolate chip cookies to some local fire departments in Charlotte.

Kristen participated in the 9/11 National Day of Service. She baked and delivered homemade chocolate chip cookies to some local fire departments in Charlotte. She volunteered through the Bank of America Community Volunteers which provided the contact information.   She called several fire departments to arrange delivery of their cookie trays. She picked stations in four different parts of town in order to cover a wide area. The project gave her an opportunity to share one of her favorite things to do and bring a smile to someone else. She was able to meet firefighters at each station and thank them for all their hard work and dedication to keeping the community safe. She was able to sit in one of the trucks which was she thought was really cool. Kristen said it was good to see their smiles when delivering the cookies to them. Kristen said it was great to show our local heroes how much they are appreciated.

Kristen’s second activity was as a rescue dog handler for Project H.A.L.O ( Helping Animals Live On).  Her duties included event set up, handling rescue dogs during the event and providing for its needs, speaking with potential adoptive parties, and encourage support of the organization to event visitors.