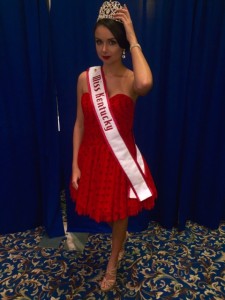 Leanndra Thompson 2015 Miss Kentucky attended the Lexington Heart Ball. The Lexington Heart Ball was put on by the Lexington Heart Association which is a benefit dinner to help raise money and awareness for heart disease. Today is also International Wear Red Day to show support for women’s heart health; which is why she wore a red dress! Her hair and make up were done by Jacqueline Smither who was the 2013 National American Miss Kentucky Teen and is now a hair and makeup artist for Paul Mitchell. Leanndra met her at her first NAM state pageant and they have been friends ever since. Leanndra loves how NAM has brought her life long friends like Jacqueline!

I could not believe I had won Miss Kentucky 2011-2012 in the Miss division. It was my first pageant and I thought nothing would come of it, but I was wrong!

My name is Ashley Thompson, and I am not an ordinary pageant queen; I am a soldier. I joined the Kentucky National Guard in 2010 and since then, I have loved trying new things. I am a tomboy and have never learned how to use make-up or fix my hair, but I had an amazing journey learning that and more during the national competition in Anaheim, California.

I started my journey with a letter in the mail, open calls, phone interview and a phone call that I had won state queen! I almost thought she was joking! I did not get crowned because of Army training, but I did get to go to nationals and that was amazing! It was my first time going west, my first time going to Disney, and my first pageant! I met some really nice people there. They all helped me, even the other competitors. I originally tried this pageant because it was so different from all the others and anything I have done before. Military training is totally different from the runway, but this pageant has the same values, like integrity. The pageant requires community service, goal setting, and interviewing/speaking skills. These guidelines made for some fierce competition, but great friends! I will never forget going to Disneyland or being on stage, but the best part of it all was that I set a goal and I met it!

One thing that stuck out to me most was during our Thanksgiving banquet, they took the time out to play a slideshow of pictures of the U.S. military and thank them for everything they do. It is amazing to know that there is a beauty pageant that is not all about dresses and swim suits, but caring about the future of its competitors, individually and in the big picture.

I am still meeting new people as I prepare to crown my successor at the state competition and I love every minute of it. Thank you, National American Miss for a wonderful experience and for supporting our troops!